SFICE has been selected as external expert by the consortium of the project BATEEIRO – BoAT ElEctrification for the decarbonisation of the fishing sector at the Island of aROusa, which has received a grant from the H2020 project NESOI – New Energy Solutions Optimised for Islands (G.A. 864266). This grant will be used to take all the previous steps for the realization of a demonstrator of a boat for mussel fishing (bateeiro) hybridized with batteries and electric motor. The activities in the framework of this project will last 12 months and started in April this year.

The promoters of this project are the Asociación de Mejilloneros de la Isla de Arousa, the Organización de Productores de la Provincia de Pontevedra and the Consello Regulador Do Mexillon de Galicia. The project is part of the Arousa in Transition Roadmap and has the support of the local town council.

This project was born from the need to decarbonize the Island of Arousa, where the project is being developed, whose emissions are mostly due to this activity, which is currently carried out with boats that have diesel engines and consume an average of 11,500 liters of diesel per year. Considering that there are approximately 110 bateeiros in Arousa, and 1200 in Galicia, this is a project with great prospects of reducing emissions if applied to the entire fleet, which are boats of very similar use and characteristics. 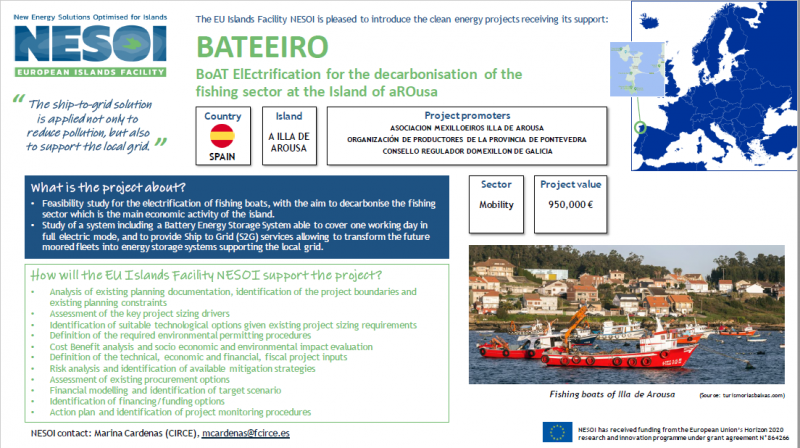